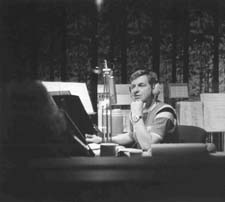 Jay Nelson in the CHUM main studio
Hear Pat read this entry
I don't think I'll ever forget the first time I laid eyes on Jay Nelson.  I had only been with the station for a short time, and was finishing my shift on the all-nighter... new djs always “broke in” on the overnight shift, since there were fewer listeners who might hear the occasional technical glitch or in my case hearing the call letters as “CKLW” instead of “CHUM”... I hadn't made the switch in my mind quite yet you see.  At any rate, there was no operator on duty for the overnight show, so I had to run the board myself.  As I was getting ready to give my “farewell until tomorrow” rap I looked up through the glass into the studio, and what I saw damned near scared me!  Nelson had just flopped into the chair, and with his head in his hands was weaving back and forth, eyes bloodshot, unshaven and looking like death warmed over.

Normally by this time Jay's operator would have been there ready to go, but today he was running a bit late so it befell me to run Jay's board for awhile.  After weaving around in the chair for a couple of minutes, he looked into the control room.   He stared at me for a second, and suddenly realized that I wasn't the guy he normally saw at 5AM and inquired.

I answered as delicately as I could “I don't know where the f%$k George is, so it's you and me Bubba!”

And that's the way our relationship started, Jay Nelson and me.  I had no idea if he was hung over or stoned, and didn't care.   All I knew was that he was the most brilliant air talent I'd ever seen, because as soon as my last record ended he was not only upright in his chair, but had pulled himself completely together.  The second he cracked that mike he was engaging, funny, relatable, friendly and the absolute personification of anything one could ask for in a morning man.  As soon as the mike was off however, he re-assumed his former association with the desktop... he looked like Hell!

Frank Coxe was apparently raised by Jesuits somewhere in Pennsylvania... I'm told Scranton which makes sense since Scranton is the home of a highly respected Jesuit university... and spent some time in radio there.  At some point he wound up on TV in Buffalo, NY wearing a pith helmet and a leopard skin costume, calling himself “Jungle Jay Nelson” on an afternoon kid's show.  In 1963 the CHUM folks were looking for a new morning man, saw him, and decided he was a better option than the other candidate they were looking at....Irene Dunn, Granny from “The Beverly Hillbillies.”   Good choice!

Jay Nelson possessed the one characteristic that I regard as absolutely essential for a successful morning man, the ability to think on the spot.   He never prepared any material that I know of. All his one liners and jokes came to him Johnny Carson style... extemporaneously.  He could be hung over, half asleep... hell, half DEAD for that matter... and the funny stuff would just happen.  I've NEVER been able to do that, and I don't know how those guys do it either.  I had to sit and think up the bits I did, it was hard work.  Nelson, and people like him, are just naturally funny.   Like I said, it just happens.

One of Jay's classic stunts was to send an imaginary character named Shredney Vashtar to jump the Niagara Gorge on his bicycle.   He had sound effects, “live” reports, crowd noises.. the whole 9 yards... only to have poor Shredney splash into the river at the end of the show.  Believe it or not, people actually showed up at the falls to watch him.  That, my friend, is the power of radio... a lesson I learned and never forgot.  I used that power MANY, many times in my career!

Nelson was like most of the other great morning men I knew in another way too, he was extremely insecure.  He was like that class clown you might remember from school.  The one who was always goofing around, telling jokes, playing pranks... basically begging for attention.   Without it he felt threatened, or worse irrelevant.   Jay was a good guy, but nobody really knew him.  He'd attend the Wednesday morning, post meeting breakfasts at Seniors occasionally, but instead of communicating and commiserating with the rest of us he'd be telling jokes.   He was, as they say. “always on.”

Jay and booze were a bad combination.  He drank a lot, and was in pretty bad shape as often as not when he arrived in the morning.  I think it probably harkens back to his feelings of insecurity.  Dick Smyth, CHUM's legendary news director, thinks it might have had as much to do with being raised by Jesuits.  I don't know what was eating away at Jay, but I knew he suffered greatly.   He never seemed to be a happy man, ever.

Jay spent 17 years in the morning slot.  Then, I'm told, was advised that his talents might be better put to use on CITY-TV as a weather man.  I'm sure Jay knew better... he'd overstayed his welcome, and was being pushed out.  He lasted for a short time there, then wound up bouncing from station to station.   Eventually the booze, and his insecurities, caught up to him.  In the last years of his life he worked as a teacher at Toronto's National Institute of Broadcasting, Operations manager at a small station in Newmarket, ON, and finally as a Maître d' at The Daily Planet restaurant in Toronto.   He died on February 18, 1994, apparently of liver issues.  As I understand it, the booze finally got him.

In 40 years of radio and television there's one thing that I've witnessed time and time again, the utter destruction of lives that booze and drugs can bring about.  It's stunning, and not easily understood by those who don't see it close up.  Oh, you may have someone in your family or a friend or two with substance issues, but to see outrageously talented people destroy themselves one after another... that's a different animal altogether.  I was never as successful as some of these folks.  I never had that level of talent, and I damn sure never had that level of need.   The absolute need to be an entertainer, to achieve validation from it.  To me it was a job.  It was what I did, not who I was.

Thank Heaven for that.   I may not be rich and famous, but I'm alive!

Ops burned out quickly with Jay Nelson. Of course they also had to deal with John Gilbert. For Bob McMillan and Zeke Zdebiak it was a path to The Production Department. It was not until years later that I discovered "Mac" got up at 3AM, Vomited, and drove in from Oshawa.

To Jay's credit, he did not allow himself to get into "a Rut". He seemed challenged to try New Things. I recall recording Jay backstage with Don Rickles for a week's worth of "Bits". He also had a live chicken as a co-host for a while. But My Fav was Shredney Vashtar. It was The '70s and Women's Lib was being followed by Gay Rights. Although I don't think Jay ever let on that Shredney was "Gay", it was clear he was. To the best of my knowledge we ever received a complaint.

Jay did Shredney as a warm, funny person that I think listeners could identify with as a Dreamer and a Schemer who always saw The Silver Lining and never Gave Up.

On Sunday morning during Asby's Show I was struck by how "real" it sounded. A few minutes later Reg phoned to say that The Niagara Falls Convention Bureau called to ask where "we" were. Apparently "hundreds of people" had shown up.

Remember.......Jay Nelson was The Last Surviving Member of the Allan Slaight and Committee led by Larry Solway 1050 CHUM. J. Robert Wood was the architect of A Revolution at 1331. When the smoke cleared Jay was STILL doing mornings at 1050 chum.....but Top 40 Radio had changed.

Somehow....Jay made himself "fit". For many years to come.
WC

Jay Nelson was a genius and one of the truly funny guys in Toronto radio history.I used to love it when him and Dick and Henny would get into it.Jay was a prankster ..how many people remember the morning he spiked Dick's Pipe with grass..mellow newscast that morning